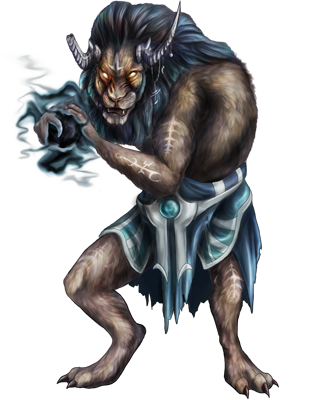 Alcor is infected with Lycanthropy. Changes into a beastly monster after exposure to moonlight or especially frustrating board games. Howling at the moon relieves the symptoms for a little while, but use a Golden Apple for best results.

Alcor grew up with Alnair and they were friends for a long time. Together they pursued their research into harnessing the power of the skies. But where Alnair is taken with the power found in stars and light, Alcor became obsessed with the idea of all that is hidden in the darkness between the stars. Their friendship finally ended, when Alcor returned from one of his excursion...changed. He never told anyone where exactly he went but he brought a strange artifact back with him, a black, shadowy orb that now he is never seen without. His fur and mane lost their formerly vibrant colours and whereas before he was ambitious but enjoyed the company of others he is now single-minded in his search for greater power and does not show any regard for the wellbeing of people that get in his way.