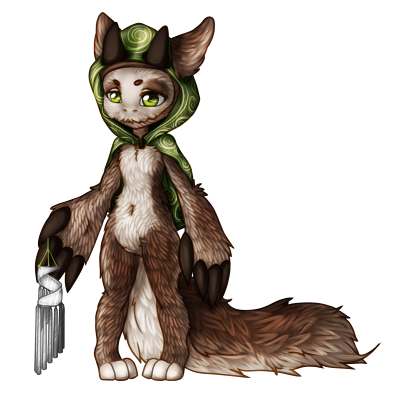 Chimer is... Acclimating, to life in a village with creatures mostly native to this Realm. He sometimes struggles with understanding the customs and speech of other creatures, and emotions are particularly difficult for him. As he was originally a Soul Elemental, many of the experiences of now being a living, organic entity are completely foreign to him, and more than a little daunting at times. However, he's come a long way, and is very comfortable in this new form.

His closest friend in town is Rhonden, though he does try his best to please Mia, as she's been very standoffish since a past event occurred, which has conspicuously remained a mystery to the others. Mia seems very touchy about it, Chimer seems embarrassed, and Rhonden seems sad. Aside from that, he's a bit brusque around any angels, even if he seems slightly fearful of them. Bao may be a friend, but the he's a bit obscure, so it's difficult to tell, but Chimer doesn't have too much of an issue being alone.

Chimer chose his name because of the metallic wind chimes he keeps with him at all times. He's in love with music, but these are the only real instrument he's been able to acquire. They hold a lot of memories for him, but more than that, they're also haunted! For, if anyone ever becomes lost, the chimes will ring specifically for them, spirits whistling and ringing the chimes in an ethereal tune, guiding the lost person back to safety, should they choose to follow the sound of their music. Chimer always has the wind chimes out on stormy days, and every night--now that no one stops him, he does all he can to ensure nobody gets lost and scared, or perishes because they had lost their way. If a person is too weak to go to the chimes, the spirits will guide Chimer to that person, and he'll do all in his power to aid them.

Lately, he's found a mysterious flower-lover who's visiting his chimes. The first inkling he knew of it was after a storm of the early days of living in the Palace. He had left his chimes out, just within sight of the village, but was forced to head indoors to avoid getting blown away, or overcome by a cloud mass. When he returned, he found a small flower resting by the chimes, and the spirits there were unusually exhausted, but joyous. While he normally loitered in plain sight of his chimes when he hung them up, he began to hide himself nearby, or leave the place altogether. Often upon his return, he'd find another flower, or at least a petal, and footprints, of the likes which he's never seen before, imprinted on the cloudy ground. His curiosity overcame him one day, and he tried to track down the owner. He failed at finding them, but did, instead, discover a great many meteorites which were coated in a comfortable woolly substance--just the stuff for a tailor. He collected it, and gave it to Rhonden, who began to experiment with how to use it. And so, a new habit formed, where he would gather the wool from the stones during his explorations, still keeping a lookout for the owner.

He finally spotted her, once; but, as they was singing with the chimes, he hung back, reluctant to intrude, and overcome with a sense... some emotion he's never yet felt, really. But he welcomed it, and treasured those thoughts, realizing he was immensely happy that some other creature--he'd never seen a Lumey before--was able to take interest in music as he had. However, they had spotted him, and scared to be caught watching her (he looks awfully predatory), and to be misunderstood as an enemy, he dashed off, leaving the chimes alone for a whole day before he dared to return, greatly shaken. He'd never leaved his chimes behind for that long, but he felt so terrible for what had happened.

He yearns to speak with the critter, but isn't sure how to go about it, especially considering his appearance, and their first disastrous interaction. He also wants to leave something behind for them, like how she does with the flowers, and so he's begun to carve wooden chimes, planning to leave those for her to take back. He's worried they'll never come back once she has her own wind chimes, but it's all he can give.

He hasn't dared to tell anyone else about this visitor. He's scared of what Mia will do. And, while he would tell Rhonden, Chimer himself is illiterate, and as Rhonden can't speak, Chimer is also afraid of what the Rune Priest might do too. This is something he wants to keep secret, a special event, someone who he can finally make the right impression with. Someone he could sing with, someone to share in his passion for music, who won't look at him and see only the horrors of what he's capable of, or hurt him-

A friend with a new slate, and no history to tie them together. That's all he wants. And he hopes he hasn't already ruined his chance.


If he has to fight, he calls upon strong emotions that these creatures feel in order unlock his soul elemental abilities. As this form is a banishment, it's very obvious whenever he's feeling any emotion as all, because his eyes begin to gleam--the stronger the emotion, the stronger the glow, and the more potent his abilities are. As a Soul Elemental, he's capable of making any soul corporeal to some degree, enough to harm living creatures, or at least weaken them by directly attacking their consciousness. If he's desperate, he will try to forcefully rip the soul of his enemy from their body, then sever the tie they have to this world.
Alternatively, he is capable of hand-to-combat, and his claws and teeth already serve as dangerous weapons. Moreso his teeth than claws though, as he clips his claws to use as makeshift mallets for the chimes, or any instrument he can really.

<Paintie by Khaos ! <3 >
<I have no idea what I'm doing with his house. Just experimenting really and wondering why the presents and candles are so HUGE>
((This is all from an original universe that I've created, known as Prian. If you have any questions about it, feel free to ask! Also, I'm usually pretty open to rp, and all this about Prian is simply used as reference to show that there is something I'm pulling from. You don't have to know anything about it if you want to rp with me, I'll accommodate for anything ^v^ it's all for fun!))