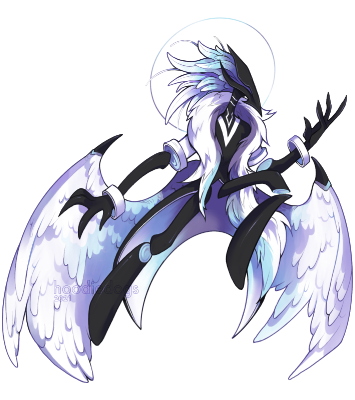 Lur is my main sona, an alternate form for myself.
All comments from this villager will be written from the POV of the person behind the screen.

An ambivert entity who represented with powers relating to attraction. In a general sense, Lur was a kind hearted and loving soul who cared deeply for others, but he intentionally chose to distance himself from people and hide his true feelings for a number of reasons which he refused to disclose. When he was still human, he was taught that he was a burden to others for expressing problems or negative emotions, so he put on a facade that everything was fine and constantly pretended that he was happy even when he was miserable.

By nature, Lur considered himself to be an ambivert, but he leaned slightly more to the introverted side in most situations. He did poorly with large social groups and had a tendency to keep his own personal friend circle small, usually only surrounding himself with those he’d really come to trust. He tried his best to be kind and considerate of everyone’s needs, but like everyone else, he had his moments of selfishness or focused too strongly on one person. Nonetheless, to those he truly considered to be his friends, he would often appear amicable and outgoing, and his true self came out of its shell with little to no reservations. To strangers, however, he was much more shy and withdrawn. He desired deeply to make more friends, especially ones who shared his interests, but his experiences while he was human left him with a fear of rejection, so there were times when he’d convince himself of a hundred reasons why he’d never be liked, and thus would give up before even trying. As such, it was difficult to get close to him, and he prefered to keep everyone at a distance whenever possible.

He struggled heavily with an inferiority complex and found it extremely difficult to interpret whether someone was being genuine with him or saying something just to keep him happy due to the latter repeatedly happening to him. Even when his friends reassured him they were being genuine, he still found it difficult to accept things and often his mind tricked him into believing that everyone was lying. Because of this, he was prone to bouts of bitterness and either accidentally or intentionally pushed people away. Thus, he tried to operate as a lone wolf, vastly preferring to act as a social link that brought others together over shared interests and attractions, while keeping himself out of it. That said, the more he saw other people together and having fun, the more he wished he could be like that too. It was a vicious cycle for him and though he desperately wanted to break free of it, he was never able to. Often, he ended up getting lonely and longing to be around others, but still fought with the negative thoughts in his head, so he tried to distract himself with escapism and fantasies from his imagination. This was a common comfort for him when he was human, and it carried over into his immortal life as a magical entity as well.

Unknown to most because he chose to hide it, Lur was very energetic and fun-loving under the surface, and had an adventurous spirit. As only his closest friends knew, he got a good kick out of pranks and shenanigans, and he was a massive thrill seeker. When talking about the things he loved the most, his true colors shone through and he became much more lively, much more energetic. Still, just like anyone else, Lur also had his lows to contrast his highs and there were inevitable moments when his neutral or happy state sank into something negative. There were times when he stretched himself too thin or was worn down by socializing and needed to be alone, and if he wasn't given space when requested, he would get grumpy and forcefully isolate himself. He’d also grown to have very little use for those who sought to use him for personal gain, and if he sensed that he was being taken advantage of, or someone wasn't being genuine with him, he could and would turn extremely cold and caustic without warning, and would immediately shut them out with no second chances given to regain his trust.

By default, Lur had many associations with others because of how often he mingled with other entities and the mundane side of society. He’d met many people in the course of his life up to present, and he had many friends and acquaintances come and go over spans of time. Despite his numerous acquaintances and loose use of the term “friendship,” he really only had a small handful of individuals that he truly considered friends. His personal circle consisted mostly of other entities like himself, but he'd befriended a couple of other human and non-human entities as well. Lur cared deeply for these individuals and, as a result, tended to spend more time with them than with acquaintances or casual friends. Additionally, being what he was, Lur was capable of fusing himself with others, and would sometimes be found fused together with his mate or any of his closest friends. His reasons for fusing varied; sometimes it was for comfort reasons, other times it was just because he desired to be closer to that specific individual. *Given what Lust represents (which you can gather based on their name alone), I'm not going to be linking an image of them here due to potential Terms of Service violations. The design isn't explicit, but I'd still rather play it safe than sorry lmao.