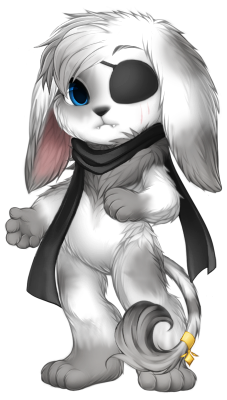 ✦•• Toyhou.se ••✦
Oliver, full name "Comic 'Oliver' Quartz," is the twin brother of Rocky. He is a mix of gray lop rabbit, white lionhead rabbit and white lion genes all combined in one body.

Although the seemingly perfect hybrid look, he was actually naturally born a gray lop rabbit just like Rocky. The freaky hybrid features started to appear on him as a result of an accident occured when Rocky performed her experiment alongside Oliver, mutating his gene finely balanced out by the magic of Shecklet.

Oliver moved into Aster Guild way after his twin sister does. He moved in at the same time as Lillianna, his sworn sibling, does. Although he's technically families with both Rocky and Lillianna, he doesn't live in the same house as them. Instead, he joined the warriors and went on to live together with Magenta, his boyfriend.

He picked up quite a lot of habit from Magenta, most noticibly is his ever increasing temper and hatred toward cats (even though he is part cat himself.) Although he isn't as brute as Magenta, but more or less like Rocky in term of general behavior and habits.