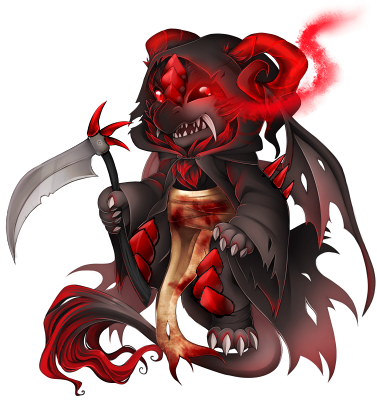 Rain is infected with Zombipathy. Eating brains relieves symptoms for a time, but comes with memories of the brain's former life. Your doctor recommends adding hot sauce for extra flavor, but a Golden Apple a day will send the Zombipathy away. Pan pride flag:http://www.furvilla.com/forums/thread/94625-pride-flags-for-dragons-free
"For a long time, I have felt a sort of... connection to this place. It was here that I was born, raised, and trained by my parents, and because of their protection I have become strong. To honor their memory, I shall continue the cycle-I shall protect all who dwell within my village. From the tiniest deer to the mightiest beast, I shall fight for them as if they were my own children. That is my duty, my responsibility as a leader, and I shall live up to my status-till death due me part from my village-no matter what."

Leaves and twigs crunched beneath your feet as you ran, the silhouettes of darkened trees looming over you. You looked wildly around you, but there seemed to be no way out of the dimly-lit forest. No escape from it. The fact that there was no moon tonight didn't help either, as you had trouble finding your way in the dark.

You risked a look behind your shoulder, and nearly let out a scream. Something was on top of one of the trees, staring down at you with glowing red eyes. It suddenly jumped into the night sky, pointed wings unfurling as it took flight, pursuing you. You looked back ahead and continued to run as fast as you could, but there seemed to be no hope for you.

The sudden sound of swooping wings came from behind you, and you almost let out a shriek as you leaped forward, desperate to get away from this....thing. Unfortunately, your foot caught on a branch, and you were sent sprawling forward into the leaves and dirt.

Though your face was in the ground, you could almost feel it's presence as it stood over you, waiting, You cracked open an eye and turned your head so you could get only the slightest glimpse of what had been chasing you. The figure stood over you, it's eyes blood red and menacing, with a black and red bat perched on it's shoulder. It's wings closed up upon it's cloaked back, and it held a large scythe in it's claws. Suddenly, it reached down swiftly and grabbed you by the arm, pulling you up and out of the dirt and into a standing position.

Before you could even utter a word, it pulled off it's hood to reveal...the smiling face of a gray dragon? "Hi there, I'm Rain!" the dragon chirped, as if it just hadn't scared you out of your wits. "Sorry about that. I saw that you were lost earlier and tried to say hi, but you ran away. I just couldn't leave you out here in the cold!" You were too bewildered to say anything. "Say, why don't you come back with me to my village? There we can get you a room in the inn so you don't have to stay out here in the cold!" And before you could utter a word, the dragon was already pulling you buy the arm, taking you to some buildings in the distance. Still shocked but not quite afraid anymore you let out a small sigh and thought, 'Well, it could be worse!'

Leader of Silverflecked Village, Rain is a kind dragon who loves to hang out with others. She loves everyone in her village dearly and would do anything, even give up her life, to save them. Rain started training with a weapon at a very young age, as her parents believed she was destined to become a great fighter. A fast learner, she was taught to protect the innocent, kill only monsters, and fight for honor. Even at a young age, her weapon of choice was a scythe, and together she and her father hand-crafted the one she has with her now. Rain sees her scythe as more than just a weapon, as it is a bearer of precious memories and a reminder of all her parents have taught her. If anyone even touches her scythe, Rain will immediately fly into a rage and last out at the unfortunate offender.

Rain has a fascination with scary things, and often spends late nights watching horror movies and scaring others. All in good fun, of course. Rain has been afflicted with Ferality in the past, the disease taking a heavy toll on her physical and mental wellbeing as it caused her to viciously attack others, almost leading to the demise of the victims and Rain herself as the strength was sapped from her body. Once she was cured of the deterioration of both mind and body, realizing what she had lead to a mental scar, which may explain why she's never taken a mate. She fears she may hurt others, and is self-conscious, thinking that others judge her because of the illness. This causes her to seek out friends who have gone through hardships in their past, and have become mentally unstable because of it. She wishes to surround herself with people like her so she will not feel so alone.

One of Rain's greatest fears is water, and avoids it at all costs. 'Drowning' is at the top of her 'Worst Ways to Die' list. This is because she nearly drowned when she was younger, and that experience has stayed with her ever since. But Rain's one greatest fear is failing, and as a result losing those she loves. She is constantly paranoid she won't be able to defend her village if she needs to, and this fear drives her to train everyday by fighting fierce and deadly vicious monsters. This fear stems from a heartbreaking memory Rain carries as her biggest burden-the loss of her mother. Some time ago, Rain was with her mother when they were attacked by a hoard of monsters. Knowing they were too dangerous to fight, Rain's mother forced the young reaper dragon to flee, and the promise that she would be alright was the only thing that kept Rain running. But when Rain returned after the monsters had left, it was apparent that the opposite of that promise had taken place. And so every year, on the anniversary of her mother's death, Rain visits her grave. To make it more convenient, Rain actually started Silverflecked Village near the grave, near her old home. Her companion minipet is Luna, a black bat that matches Rain in colors and attitude. A gift given to Rain by her late mother, they have been together since long before the day Rain founded her own village.

Of course, sometimes even beloved memories can't stop a warrior, trained to protect the innocent and ruthless when angered, from lashing out in times when they are alone and susceptible to their own destructive thoughts. Sometime after her mom was murdered, Rain would take it upon herself to endure more taxing training, something her parents would not put her through. Rounds that left her bruised and cut, with swollen eyes and aching bones. But no matter how hard her father tried to dissuade her from the techniques of self harm she used to improve her skills, there was no stopping her. Eventually, Rain outgrew this painful way of training, building up her skills at a reasonable pace instead of rushing into it all at once. But of course, these sessions did not just fade away into the past. They were Rain's way of coping, and so she gave it her all when fighting the higher monsters or destroying the landscape, never allowing herself to be broken. And she was always quick on picking things up, a fast learner with insatiable interest in fighting. Rain still has the morals her parents taught her, sure, but this way of rapidly improving her skills led to her becoming a better warrior than her parents had ever dreamed of her becoming.

Village Relationships
Rain shares a special connection with Silver, Chester, Fern, and Blue. Due to the troubled pasts they all have in one way or another, they have formed a sort of group, perhaps even a club. Rain comforts Silver and Chester when they need it, helping them interact with others while also protecting them from danger. She cheers Fern up when the fox is especially gloomy and helps her with her studies, and views Blue as one of her best friends-oblivious to the wolf's true feelings for her.

Hedwig is one of Rain's closest friends. The gryphon having always been there for Rain and encouraging the dragon by being one of the first to move into Rain's village, Rain would sacrifice her life for Hedwig's in an instant. Rain helped Hedwig to construct the only inn in Silverflecked Village, much to the gryphon's glee, and they have been closer ever since.

Wolfgang Rain considers Wolfgang a friend, although they have never really bonded together. They are friendly to eachother, and while they do occasionally have a laugh together or exchange greetings when stumbling across each other in the village, Rain would have never met Wolfgang nor become acquainted to him if it weren't for Hedwig.

Rain had known Cassie since they were kids, and considers them to be one of her best friends. The two often meet up together when Cassie isn't with her special someone, and they love getting a bite to eat as well as exploring. Rain has tried to include Cassie in her club with Silver, Chester, Fern and Blue, but Cassie politely declined, saying that she wouldn't want to ruin the relationship Rain has with the four.

Pacifica is, not surprisingly, one of the more difficult people Rain had to interact with. The dragon doesn't really like the magpie, and tends to talk to Pacifica only when the situation calls for it-and even this mostly because of Cassie. Needless to say, Pacifica is much to grumpy for Rain's taste.

Slash has greatly earned Rain's respect by protecting the village, as though Rain is an experienced fighter she doesn't have the time to do so, being the leader of the village and all. Though they don't always have the time to talk, the two are fast friends, Rain being the only one who knows his Truename, along with some of his other secrets.


“Care to explain why ___ is hiding in my arms at the site of you.”
“I’ve been stalking it, why?”
“This is my child Joey.”
“...How did that happen?”
“I found it in the woods.”
“Okay, so you didn’t-“
“NO! Anyways, I just want you to make sure that my child is safe in the Hive.”
“Got it, kill anyone who touches the child.”
“Joey no- actually, Joey yes. Anyone. I agree with that.”
female // polyamorous/panromantic // she/her and they/them pronouns 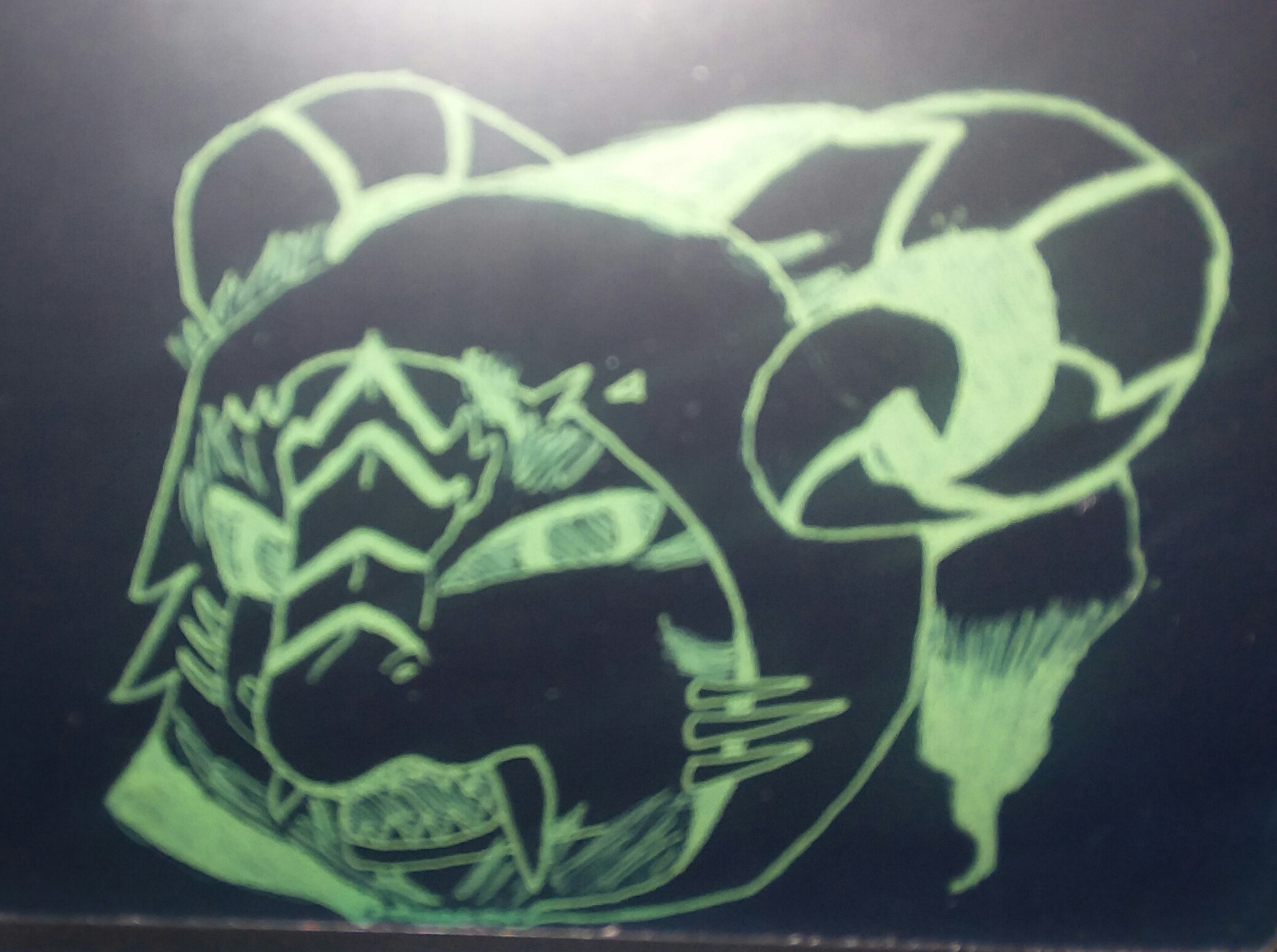 CSS by Lu !
All comments from Rain will be in character unless stated otherwise!