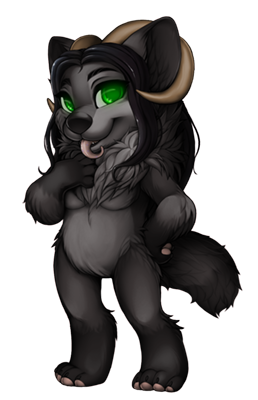 Rotsuoy is infected with Lycanthropy. Changes into a beastly monster after exposure to moonlight or especially frustrating board games. Howling at the moon relieves the symptoms for a little while, but use a Golden Apple for best results.

Rotsuoy comes from a planet called Lunalah, of unknown reaches of space. She is an alien visitor of a race called Wruwara, and her subspecies is called Arwoon. Like all Arwoon Wruwara, she contains bioluminescence in her eyes and in two thin stripes down her back which increase and decrease in vibrancy depending on her physical and emotional condition. This dim glow is difficult to distinguish during the daylight, and is similar in nature to that of the fungi that share her planet. Additionally, she bares two curled horns, the most distinguishing feature amongst her subspecies. These horns are more like a bovine's horns than an ovine's in that they are smooth, but curl in similar pattern to ovine until they die.

As an explorer she enjoys meeting new people and seeing new places, but she is sadly lacking in social energy. She spends most of her time alone with her trappings, or in her study, writing letters to friends.