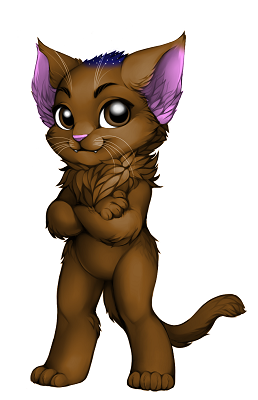 Relationship Status: Lovingly married to the light of his life Stargleam Shimmer
Has three children: Slate, Cotton Candy, and Orion.

You let out a breath as you stared at the moon in the sky, shivering slightly. It was cold out, and you had no idea where to go. You had decided to stay at the village a little longer, but were now at a loss for things to do. You could hear music coming from down the road as light poured from a buildings windows, but you were not sure if you wanted to go to the party. You hadn't been invited, after all. Though you were sure Rain would let you in anyways, you felt like that would be rude. Suddenly, a chipper voice whisked you out of your thoughts.

"Why hello there!" You jumped and spun around quickly, as you hadn't heard someone approach you. The cat had chocolate brown eyes and fluffy chestnut fur. His ears were a bright pink in contrast, and the spot of blue fur atop his head, dotted white with stars, seemed to glimmer and sparkle in the moonlight. And he seemed to be wearing a... dress? Surprised and a little bit stunned, you could only stare in reply. Yet this did not stall the feline.

"I'm Galaxy! Galaxy Kritter!" he chirped. "It's a pleasure to meet you!" He grabbed your hand and shook it vigorously. "And what are you doing out here in the cold! You must come to the party!" he laughed. "Let us go, the night is slipping away!" And before you could protest, or even say a word, he had grabbed your arm and was pulling you towards the music.

You danced the night away, lost in your own world of music and lights. It was fun, and you were having a very good time. You were thankful towards this mysterious feline, and hoped that you could express your gratitude to him later. But the night flew by, and the party came to an end. You were quite sad to leave, and even more so to know that you wouldn't see Galaxy again. But then again, was that true? After all, there would be more parties. You smiled to yourself as you went to ask Rain, the village leader, when the next gathering would happen.

A kind, cheery, and overall happy-go-lucky feline, Galaxy Kritter loves to party and cheer others up. Acquaintanced in medicinal studies, he likes to help out his friend Hedwig by working in the infirmary at her inn. Somehow, he has become good friends with most everyone in the village, even Pacifica-the town grump. Galaxy Kritter has a lot of kin, mostly nieces and nephews as he only has a couple brothers and sisters. He's a tough bab who is always willing to defend his friends and family despite his somewhat lackluster fighting skills, and enjoys cross dressing as he is into both fashion and beauty stuff.

Copied from the encyclopedia:
"The traditions they all share tend to be ones based off agriculture. Dragonsmaw celebrates four major holidays. The Seed Sewing, held in Spring, is dedicated to meeting new people, understanding new things, and beginning new chapters in one's life, represented by planting seeds in the field which will one day bear crops. The Rain Calling, held in Summer, is a holiday about maintenance and nurturing, and is dedicated to maintaining relationships, cleaning the house, and stopping bad habits, in honor of the struggle of tending a field. The Winter Respite, held in winter of course, is a holiday about bonding with family and remembering family that is permanently dead. These are all usually overshadowed by the festivals of other nations, but are respected and observed by Dragonsmaw residents and school is usually on break around those times.

The largest celebration, and the best known, is the Great Harvest. Held in fall, this celebration honors the birth of Dragonsmaw Manor as a nation and celebrates the Moonlit Curse that allows so many ghosts and zombies to keep living. Smashing pumpkins is symbolic of the revolutions that tore down the old orders, and giving pumpkins is symbolic of the new life that the curse gave to many residents. Candy only entered the event in later years, simply because candy became a favorite part of Dragonsmaw diets. Candy is distributed by 'candy fairies,' which are typically just anonymous loved ones (or the mayor)." I forgot who did this wHY Sketch by the talented FuwaFuwa23 ! 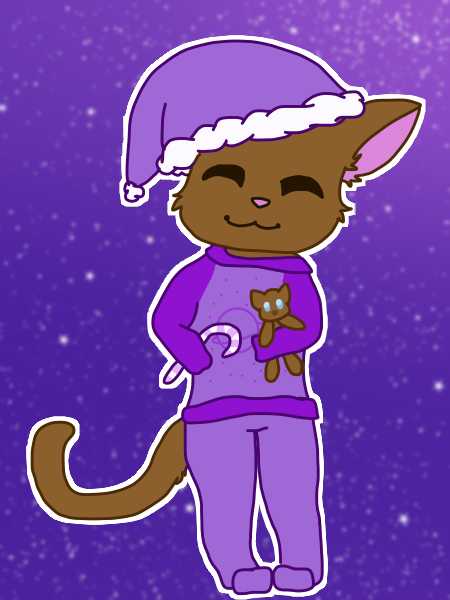 Paintie by neko360degree !
All comments from Galaxy Kritter will be in character unless stated otherwise!