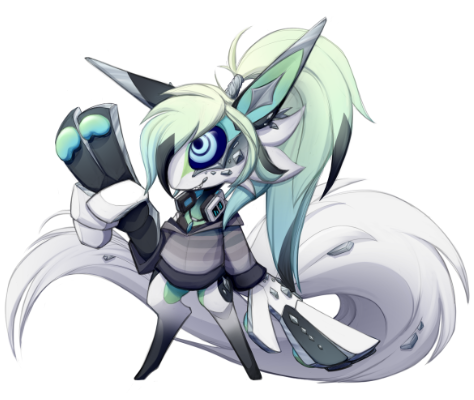 Introduction:
A feminine Scarfox with a very laid-back, ambiverted personality. She loves to listen to music or browse the internet, often daydreaming about things at the same time. Her chill temperament makes her easy to get along with, and as such, she has many friends. She works as a freelance photographer and specializes in black and white portraits, but she enjoys photographing events like weddings, graduations, etc. as well. When not working for a client, she can be found roaming around with her camera, taking pictures of buildings, sculptures, people, or anything that she finds interesting. Her work has been featured in several photography magazines.

In addition to her work as a freelance photographer, she occasionally models for beauty magazines. Like Noemi, many people fawn over Mata for her elegance and beauty, but where the former is self-depreciative and has trouble accepting compliments, Mata accepts her fans' praise modestly.

As previously mentioned, Mata is a very chill and laid back Scarfox. She has a good sense of humor and doesn't get upset easily, and she generally goes with the flow of the moment. She's a bit of a daydreamer and often gets caught up in her own thoughts when she's by herself, though, and she can spend hours at a time lost in her imagination. She's friendly, but she's honest. If you ask for her opinion, she'll give it to you straight - she'll never be blunt or rude when trying to point something out, but she also won't lie and say something looks good if it doesn't, either. Like anyone else, she has her passions and hobbies but sometimes gets overexcited about things that interest her.

Despite her social and friendly nature, she has another side of herself that doesn't come out very often…

Design Notes:
• The gems on her thighs form the Aquarius constellation
• She has glowing markings that are only visible when using her magic or when awakened
• She owns a number of oversized hoodies, including a hand-made one featuring her favorite Cryptid
• Always wears her crystal pendant
• Wears tank tops under her hoodies

Scarfoxes are a closed species created by Kawiku/Kakiwa on DeviantArt.
You may not make your own without permission.