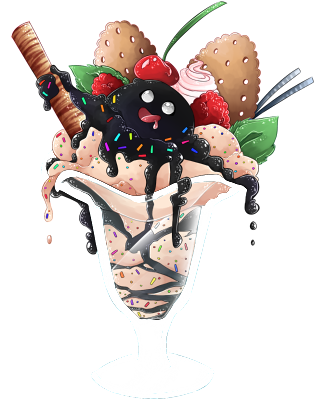 The witch who made Parfait was an experimental sort, dabbling in the necrotic arts. It was through necromancy that Parfait was "born" on her kitchen table, from witch's tar and organic ooze. The happy little blob took its first breath with a smile and a goopy gurgle, and has been growing more and more complex every day since. His personality was heavily influenced by the "mother" who made him and raised him in her basement.

However, because of his mother's lack of craftsmanship and aptitude at the time, Parfait is a shifty who has difficulty assuming an anthropomorphic form. Rather than disguising his original form with transmogrification, Parfait is stuck decorating himself to appear more palatable. He has difficulty making friends, as the general response is either to shirk away in disgust, or to try and eat him: neither of which are appropriate responses. He is known only as "Parfait," as he spends most of his time in a parfait glass, where he feels the most cozy.

He dreams of one day becoming a renowned dessert chef for the kingdom, and making a home of the royal kitchens.