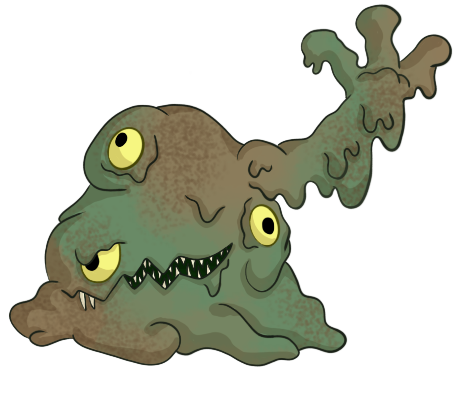 Once a well known alchemist, Professor Slimes was an expert at the art of making magical concoctions. He was always working on new recipes and perfecting the old, hoping to one day discover the lost art of the shiftie morphing potion. For years he scoured each village, searching for only the best ingrediants to create his brew. It took quite a while, but eventually he had gathered them all up. However, as the alchemist worked in his lab mixing them, his paw slipped, spilling the contents of his new potion upon his skin. He morphed rapidly, unable to stop the process no matter what potions he tried! When the change finally finished, he found that he had been turned not into a shiftie, but a pile of rancid ooze.

Nobody recognized Professor Slimes after the incident, and he was chased out of almost every village for his grotesque appearence and scent. Dragonsmaw Manor was the only one that would take him in. Now, he continues his work there, not to make shiftie potions, but to create a cure for his less than pleasent situation.